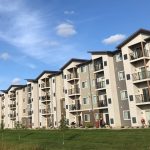 On the rare occasion a two- or three-bedroom town home apartment becomes available, Adam Dather knows it won’t take long for his phone to start ringing. “It’s pretty rare to see one available for longer than a day,” said Dather, a property manager at Lloyd Cos. “Our residents are attentive, too, so they check availability because they know the town homes are tough to get into. I usually get three or four phone calls from people in the property.”

Despite having 292 apartment units in varying styles, The Commons rarely has much vacancy. “We have a habit of being perpetually full,” Dather said. “More often than not, if we have more than 1 percent of units vacant, it’s rare. Out of 292 units, you typically have 282 to 290 of them filled up.” Ernst Capital Group saw that potential several years ago when it partnered with developer Clint Ackerman, owner of Signature Cos., to raise equity for the project. “It was a compelling site with great visibility,” said Chris Daugaard, a partner at Ernst Capital. “There’s a waterway that runs through the site and creates some nice little ‘neighborhoods’ within the property. Because there’s city land across the street, the property will always have visibility to the interstate as well, without being right next to it.”

The Commons is easily accessible by both Interstate 229 and the nearby major intersection of 69th Street and Louise Avenue. “The original vision was really bringing affordable, market-rate rental housing to that area of Sioux Falls,” Ackerman said. “Given the proximity to a lot of retail and jobs and other industries in the area, that location really was well positioned for what a lot of entry-level renters are looking for.” Ackerman deliberately integrated a variety of housing units within The Commons, including traditional apartments in a three-story building, town homes with attached garages and town homes without attached garages. “That gives us three different products, and even though they’re not that far apart, it helped us stabilize the property better,” he said. That was appealing to Ernst Capital as well. “The Commons was our first development that was large enough to feature all three of Signature Cos.’ major building types in one site, allowing us to offer residents everything from a studio apartment to a three-bedroom, two-bath town home with a double attached garage,” Daugaard said. “We can have diverse options for what most any resident may need, with a great amenity package.” Bringing the project to fruition through a capital raise also was a positive experience, Ackerman said. “Ernst Capital is always great to work with,” he said. “It’s just a very easy process when they’re raising the funds for you and putting the capital together. It was a seamless process, and that’s why we always go with them.”

The property began opening in phases in 2017. “It’s not a typical apartment look,” Dather said. “We have a lot of exposed ductwork even in our flats, or condo-style units, so it has more of a downtown-loft feel without paying the premium for a downtown loft.” Popular resident amenities include a large community building, media room, fitness center, outdoor pool and dog park. “The pool is jampacked all summer,” Dather said. “And our fitness center gets regular daily use.” The variety of apartment styles is a significant factor in retention. “We have a good retention rate,” Dather said. “Because we have such a variety of homes, we have a lot of people who maybe move into a standard apartment and after six to 18 months maybe want something bigger and graduate into a town home. So letting people move within the community definitely has appeal and keeps people here longer than they might otherwise be.” Being part of the Harrisburg School District also has been a big benefit, Dather said. “And we’re just far enough from 69th Street and the interstate where I’ve never had a concerned parent worried about cross traffic, plus we’ve got two bus stops and a city park nearby.”

Going forward, the area likely will be an even more sought-after place to live, Daugaard said. “The Avera on Louise campus is only going to expand, along with the nearby Edges office park and future development along 69th Street, 85th Street and Tallgrass Avenue. They all point to this area continuing to be in high demand for housing well into the future.”