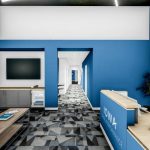 LINC at Gray’s Station has announced a new tenant in one of the building’s ground-floor commercial spaces. According to the article, “Iowa Spine and Performance will open in a retail bay at LINC, 210 Southwest 11th St. It is the third business announced for the commercial ground floor of LINC, which fronts Martin Luther King Jr. Boulevard. Also planned is Mad Meatball, a former East Village pizzeria, and Craft Bru DSM, a 60-handle craft beer taproom. ” The chiropractic clinic is anticipated to open later this summer.