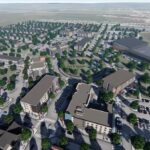 When Ellsworth Air Force Base was selected as the home of the new B-21 bomber, it meant an influx of nearly 1,500 service members and their families would be coming to Box Elder, just east of Rapid City. In preparation for their arrival and the ongoing growth of the region, a new apartment community is under construction at the gateway to Ellsworth Air Force Base.

Called The Union, it will offer 229 apartments in its first phase, plus a clubhouse, and it represents a partnership between two Sioux Falls businesses committed to growing statewide. The Union is being developed, built and managed by Lloyd Cos., with financing support from Ernst Capital Group. “We’ll ultimately have room for a few hundred apartments, and we anticipate significant demand for them,” said Jake Quasney, Lloyd’s chief operating officer. “When you look at the base’s impact on the community of Rapid City, it’s huge. The stability of that combined with the other growth they’re seeing in the region makes it a great place to be.” It’s also a place in need of more housing, he added. “We have a great team in Rapid City and have really seen traction with our other apartment communities, including our tax credit housing,” Quasney said. “They’re still short of housing, so to have the opportunity to build something in such close proximity to the base and service the community and complement the amenities in the area was a no-brainer.”

Ernst Capital supported the $38 million project with a $7.8 million capital raise. “Ernst’s ability to capitalize a project makes them really great partners to be able to put together the whole package and deliver the investor group,” Quasney said. “They’ve got a strong reputation and for us to have a resource like that to have some of our capital raised by them is a huge value to us as a business with the number of projects we seek to deliver.” For Ernst, the project represents the real estate investment firm’s first deal in the greater Rapid City area. “It’s a unique investment because of the larger development around it and because we’ll be able to draw in folks that maybe want to live on the edge of Rapid City, east of town, as well as those who are going to be on base supporting all the activity there,” partner Chris Daugaard said. “We’d looked at different projects in the Black Hills, in Rapid City for about a decade and hadn’t found the right deal. Our development partners weren’t as active there, but now Lloyd Cos. has started to work on projects there, and when we talked about the demand they were seeing, it was eye-opening. Some of the data around demand and rents was so outside the norm we had to dig in, but we validated it, and it was very apparent Rapid City needed more options for housing and more variety of housing.”

Ernst came into the project “when Lloyd was pretty far along in planning,” he continued. “So we got it put together quickly. We were excited about it and wanted to jump on the opportunity.” The Union also will benefit from being part of Box Elder’s broader Liberty Plaza development. A partnership among the Department of Defense, state of South Dakota, city of Box Elder, Pennington County and Dream Design International Inc., the development is creating a downtown for Box Elder, which doesn’t have a main street. “Liberty Plaza will be a vibrant city center with retail, restaurants, coffee shops and public amenities and services,” said Kelsey Pritchard, director of marketing and communications for Dream Design International. “Liberty Plaza will be one of the most incredible developments in western South Dakota. Along with all the growth we’re going to see in the military population, more nonmilitary folks are going to want to make their way here to put down roots in this up-and-coming community.”

That includes Liberty Center, which is designed for military members and their families as well as the general public. It includes an indoor track, fitness equipment and weights, two basketball courts, group instruction rooms and space for community and military events, including recognition, promotion and retirement ceremonies. This facility also will be used by service members for physical training and certification. The amenities at The Union are designed to complement those at nearby Liberty Center. “It’s got a great clubhouse designed by Lloyd Design Group that will really tie into the community aesthetically,” Quasney said. “Our residents will enjoy a fitness center, outdoor pool, patio and fire pit, lounge and kitchenette with coffee bar.” Housing is a key element of what Liberty Plaza is trying to create in Box Elder and adds to its momentum, Pritchard said. “There is a lot of enthusiasm out here in the broader Rapid City area among business and community leaders to welcome the new mission and support our servicemen and servicewomen,” she said. “This includes coordination for housing, job creation for the spouses and family members of the service people and coordination to support any industries relocating to the area to support the mission. Liberty Plaza is one of our most talked about projects, and we’ve seen a positive response because of its mixed uses and its impact on the community. People are excited that Liberty Plaza will enhance the quality of life and catalyze economic development.”

The current and projected population growth in Box Elder is contributing to the broader growth of the Rapid City metro, Daugaard added. In the latest census estimates covering July 1, 2020, to July 1, 2021, “Rapid City sticks out among other metros,” he said. “It has the highest growth percentage in the region, and many of the metros are not particularly close. Their great outdoor environment and open economy led people who could work remotely to look at the combination of a strong economy and quality of life and choose to move. That all contributes to historically strong demand for housing, and we think The Union is definitely positioned to capitalize on it.”