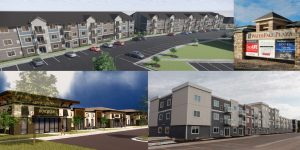 Major apartment projects, established retail development and a new property in Harrisburg all are part of a local firm’s latest investment fund. Sioux Falls-based Ernst Capital Group recently closed its third real estate investment fund with local developer Signature Cos. The Signature Real Estate Income Fund III raised more than $16 million in private investment to support four local projects. “We’re excited to have these four new, local investments in the Sioux Falls area,” said Chris Daugaard of Ernst Capital Group. “Our investors can drive around our area, see the projects and know that’s what they’re helping to build. When you look at where we’re investing, you also can see where we think growth is heading in this market.”

A significant portion of the Signature Fund III is an investment in the Willows Edge Commons apartment project, “the entry point to a larger development that’s going to be really, really cool,” Daugaard said. “It will transform the area.” The full 180-acre development from Signature Cos. is along Arrowhead Parkway between Dawley Farm Village and Willow Run Golf Course and will include commercial, multifamily and both single-family and town home for-sale units. The area also will feature a planned recreational trail running through the entire development, with two pedestrian bridges and integrated city park land, highlighting the waterway running through the site.

The first phase will be on 18 acres and include 334 multifamily units. The style will vary, including about 150 units in three-story traditional center-load apartments and the remainder in town house-style units with and without attached garages.

“This is along a main corridor into Sioux Falls with a lot of neighborhood commercial in the area that we’ll control,” Signature owner Clint Ackerman said. “We feel like multifamily is a great catalyst for everything in those developments given its proximity to the eastern gateway of Sioux Falls. It’s a direct shot to downtown and a lot of employment.” The apartments will include community amenities such as a coffee bar, gaming area and golf simulator plus a fitness and pool area. Construction has started, and the plan is to start leasing in early 2021.

On the far southeast side of town, another apartment complex developed by Signature is leasing up. Whisper Ridge Commons was also part of the Signature Fund III and includes two buildings totaling 221 units with a two-story attached community building at Graystone Avenue and 69th Street.

“They’re more of a traditional market-rate center-load apartment,” Ackerman said. “I think the southeast part of Sioux Falls really carries a residential feel, and people like to go home to somewhere that feels like a neighborhood, whether they rent or own. So that part of the community really seems to flourish.” The units range from one to three bedrooms and have a modern, almost downtown, feel to them, including some two-story loft units.

“We figured there’s no reason you can’t do that look in the ‘burbs, and it’s going really well,” Ackerman said. “Lease-up is going very well. We just opened the doors to the first 60 units in September, and we had about 40 leased opening day. Residents share an amenity package that includes a two-story clubhouse with a lofted fitness center, gaming area, golf simulator and indoor/outdoor social spaces plus an outdoor pool and patio. The second building is expected to be ready in April. “The 57th and Sycamore area has been busy for some time now, and I think you’re seeing development push down to 69th Street, and it will continue to move,” Daugaard said.

The Signature Fund III also includes investment in an existing property, Waterfall Plaza on the southwest corner of 69th Street and Minnesota Avenue. “We like the existing tenant mix, and we think it’s an attractive property in a lot of ways,” Daugaard said. “It’s well designed, and it’s got good visibility. This isn’t a corner that’s going to be slowing down. If anything, there are more rooftops coming nearby, so we think the traffic will be solid, and there will be a good opportunity to fill vacancies if we have any.” There aren’t any now. Waterfall Plaza is fully leased with retail and office and is adding on to the gaming side of Tinner’s restaurant. “That’s obviously encouraging given some of the challenges seen elsewhere this year, so we’re happy with the performance and think we’re going to see continued strong activity here,” Daugaard said.

“We’ve done a number of funds like this where we’re looking to pair new development properties with existing properties that are stabilized and we acquire. It creates a small portfolio with some diversification.”

Ernst Capital also included its first investment in Harrisburg in the most recent fund. The Creekside retail and office center at Cliff Avenue and Willow Street “is our first development in the Sioux Falls metro area that’s not in the city limits of Sioux Falls,” Daugaard said. “We anticipate a couple more investments as these lease up. The site offers outstanding visibility and surrounding future developments, include a Sanford clinic and B&G Milkyway.” The retail center developed by Signature has solid occupancy, Ackerman said.

“I think about 70 percent of the space is spoken for right now, and we feel it’s meeting or exceeding expectations and doing very well,” he said. “We’ve leased multiple spaces to a dentist, another space is a financial planner, and we are working with a couple of other interested businesses about locating in the remaining spaces at Creekside Plaza.” Overall, working with Ernst to raise capital for the projects has been a good process, he added.

“They’re a great equity partner. Everything is on time and on target, and they’re just easy to work with.”