A multifaceted development in south-central Sioux Falls, major investments in booming Harrisburg and an expansion of a popular southwest Sioux Falls apartment community. They’re all projects being funded with support from equity raised by Ernst Capital Group, which partnered with developer Clint Ackerman, owner of Signature Cos., to support several of his current projects. “They didn’t have much time to raise the funds we needed, and it went very well,” said Ackerman, who previously has worked with Ernst in financing his developments. “As always, they are the most professional equity group out there. We have a great long-lasting relationship, and I look forward to continuing it.” The projects within Signature Fund IV represent what was, until just recently, Ernst’s largest fund, with just under $22 million in capital raised. “It was committed very quickly,” partner Chris Daugaard said. “The momentum of the region is continuing to propel interest in being part of these projects. And with our model, we can plan the fund, structure and size it around what the developer is looking to do and create a unified team and plan.” Here’s a closer look at the projects under construction thanks to this partnership. 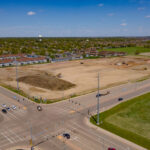 It’s rare – and soon nearly unheard of – to find nearly 20 undeveloped acres in the heart of south Sioux Falls, but that’s what Signature was able to acquire on the northeast corner of 69th Street and Cliff Avenue. “Our plan is to put 10 acres of multifamily in the back and use the remaining portion for commercial,” Ackerman said. “We held off on foundations until spring, but now we’re going full force.” The first 258-unit apartment building will include an attached two-story clubhouse and full slate of amenities, including a swimming pool, extensive indoor-outdoor community space and a fitness center. The plan is to open the first apartments in 2023. On the commercial side, “we have half of the eight lots under contract and are working on the fifth,” Ackerman said. “It’s a combination of retail centers and stand-alone users, and we’ve been happy with the level of interest we’ve received.” From Ernst’s perspective, “this is a valuable opportunity for development,” Daugaard said. “It’s such a prominent intersection; it’s appealing for multiple uses. That’s one of the strengths of the Signature team is the ability to acquire these larger tracts of land and do a multitude of uses, including residential and commercial. And bringing more residents to the immediate area supports and attracts additional retail and services.” 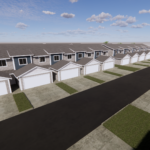 The community of Harrisburg is showing every day that it can support more residential and commercial activity – so Signature is building on the success of its Creekside development with more retail and living opportunities. Creekside Commons, a 168-unit town home community, is about one-third constructed and is expected to take about 18 more months to complete. “Everything in that area is complementary,” Daugaard said. “There’s commercial across the street, which brings more traffic, a new day care, and the adjacency to the main commuter traffic in and out of town and around the school just continues to be where people want to locate.”

Creekside Plaza 2, a new 9,200-square-foot retail center, also is included in Signature Fund IV and will mirror its predecessor, which was part of a previous fund. “The original retail center has been fully leased since the day we got it completed, and we’ve started to sign up the first tenants at Plaza 2,” Ackerman said. “We expect it will be 50 percent full in the next two weeks to 30 days.” He anticipates the retail building will be done with its exterior and shell in 60 days, so tenants can begin opening by fall. “When we funded Creekside 1, it was a bit unique for us as a spec retail and office building, but it filled so quickly and ahead of expectations it gave us confidence there would be more demand,” Daugaard said. “All the housing next door is going to support that – and you can’t beat being right next to a B&G Milkyway.”

The success of Signature Cos.’ West Pointe Commons development in southwest Sioux Falls has led to a second phase. This one is called 85 Commons for its location at 85th Street and Townsley Avenue. The 55-unit building is about 60 percent complete and should be ready in the next six months, Ackerman said. “West Point Commons was essentially full for the last four years, so we know we need additional capacity in that area,” he said. 85 Commons will offer a mix of one-, two- and three-bedroom units with attached garages and a choice of floor plans and unit features. “Southwest Sioux Falls is  in high demand as a place to live, so we’re excited to help offer more options,” Daugaard said. “This is just blocks from Harrisburg Explorer Elementary and Platinum Valley Park, and we know it will appeal to a broad range of residents.”

Signature Cos. also is expanding in the Des Moines market, and the latest fund with Ernst supports that growth as well. The company’s Prairie Village Commons will be 127 town home-style units in the western suburb of Waukee. A groundbreaking is scheduled soon and construction is expected to last two years. “The Des Moines market is a larger metro than Sioux Falls, but the two operate similarly,” Ackerman said. “Waukee was ranked one of the fastest-growing communities in the nation, and we’re fortunate we got there a few years ago.” The market also is one Ernst views favorably. “The fundamentals of Des Moines and Sioux Falls are very similar,” Daugaard said. “So when we can invest in a known market with a known developer, we consider that a favorable opportunity.”